Blackbird singing in the dead of night ..... 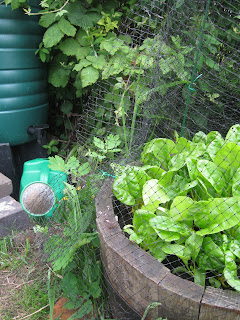 Well, to be truthful it's not actually singing in the dead of night, thank the Lord. If it were I think I'd have to hunt it down and throttle it. Given what it's doing to my front garden, that would be the final straw.

This year, in a bid to increase my available growing space I'm expanding operations in the front garden. Last year I had 2 half barrels full of rainbow chard, this year I've added in a frame for the borlotti beans to grow up and I've also dug out a small bed in the centre of the lawn and planted it with bee friendly flowers (seeds courtesy of Blue Peter) and those pea seeds I mentioned in the previous post as a cut and come again crop.

There are 2 rather large spanners in the works though. The literally large tree next door which casts a huge shadow over almost all of the garden and the more diminutive female blackbird who nests in it.

According to conventional wisdom leafy crops tend to be attacked by slugs and caterpillars while birds stick to scoffing all the fruit. So when holes began to appear in the swiss chard I checked for caterpillars and sprinkled organic slug pellets. When that didn't work I switched to normal slug pellets. Half a barrel of chard had gone before I caught a glimpse of the culprit from the living room window, a very relaxed, chubby looking Mrs Blackbird strolling through my carefully tended crop, munching on the leaves at will.

As a result of these twin pests, the garden looks eccentric to say the least. The bean frame and half barrels are squashed up into a small space near the house which gets the most sun throughout the day and everything is festooned in netting, heaven knows what the neighbours make of it (especially now they've seen me sneaking around photographing my watering can at 8am.). Anyway, must go and Google 'life span of blackbird', this is the second season we've laid on a blackbird buffet, it can't go on much longer can it??
Posted by Tracey at 07:06