The sparrows have joined in now ..... 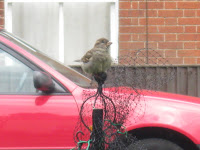 I've already written about the blackbird who's tormenting me, it now turns out that those cute little sparrows I'd been watching play in the hedge have joined in. They've found a hole in the netting around the chard and have been casually hopping in and out with beaks loaded with young chard leaves.

Aren't sparrows supposed to be rare these days? I guess I should be flattered they've taken up residence in our hedge but that won't stop me putting up new netting later on today.

Edit: Caught him! At last, a photo of one of the hedge sparrow family perched on top of the wig wam in the front garden. I'm hoping to catch the blackbird on camera too.
Posted by Tracey at 07:42