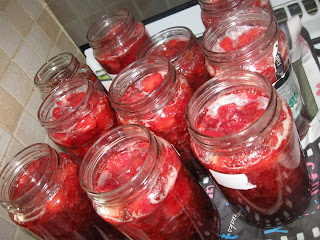 We have worked so hard today. First of all, Adam and I scrubbed the hen house with Jeyes fluid. I've never used the stuff before but I like the retro yet ruthlessly efficient vibe it has going on. The smell took me straight back to my Great Gran's kitchen so I guess she was a fan too. We're using it as insecticide in the coop but it can also do a myriad of other things like freshen the drains or, my favourite, keep the waterbutt smelling nice. I've sploshed 5ml into our waterbutt so we'll see if it works.

Adam is, as I write, finishing off painting the coop, another anti bug measure but the smart new look is a welcome added benefit.

It's also been a scorching hot, humid day so we're all grubby, sweaty and exhausted. I think I'll sneak out shortly and buy a few cold beers as a surprise for Adam as I think he's earned them but then so have I, think I may have to help him to drink them!
Posted by Tracey at 14:31