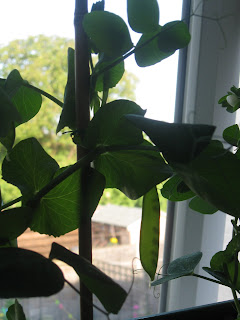 This year I'm trying my hand at growing peas for the first time, however, it turns out peas aren't as simple as I thought. After reading a few allotment keeper type books this weekend I've discovered they've got a reputation as a difficult crop. They're prone to things like pea moth and pea weevil. These beasties lay eggs in the pea pods and the beleaguered gardener is none the wiser til she harvests the peas, pops the pod and is greeted by a host of wiggling maggots instead of fresh green peas. The answer, apparently, is to sow peas either early in spring or late in winter as the pea moth/weevil is only active in mid summer. By happy accident I planted my outdoor crop of petit pois fairly early so fingers crossed.

According to my guru Hugh Fearnley Whittingstall pea shoots are all the rage amongst the glitterati in London. (They're the fine, curly bits you can just about see in the photo) When staking my peas a few days ago I accidentally broke one of the tops off so I took the opportunity to have a munch. I'm a dyed in the wool pea hater (the children love them though) but even I thought it was delicious. I have lots of pea seeds left over so may copy his idea of growing them as a cut and come again salad crop.

On the playroom window sill I also have a dwarf variety of peas growing in a trough, they were photographed only a week ago for The Very First Post!. This morning I was excited to discover they're already festooned with tiny pea pods (see photo) The biggest predator of these little plants have is probably my youngest daughter. Xanthe has been told not to pick them til they're bigger but whether she'll be able to resist temptation remains to be seen.
Posted by Tracey at 08:11