And was Jerusalem Builded Here? 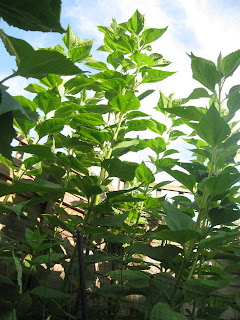 Well, I may not have a bow of burning gold or a chariot of fire but yes, I have built a kind of Jerusalem in my Green and Pleasant garden (I'd like to say I'm showing off my knowledge of the lyrics of Jerusalem but I had to Google them and got a bit carried away)

Jerusalem artichokes are the most abundant crop in my garden. I grew them for the first time last year, during the thick snow last January I was out in the garden, hacking through the frozen soil to get to the dozens and dozens of artichokes down there. Over the season they were my only really true glut, I harvested about 3 bulging carrier bags full of tubers, which is an enormous amount from a patch of ground about 1.5m Square.

Opinion is divided on the culinary value of Jerusalem artichokes, apparently the French are particularly disparaging of them. Personally I love them and have 2 favourite recipes. The simplest way is to saute them gently in a single layer in a covered pan with a small amount of olive oil, salt and pepper. For a slightly faffier version, cut them into chips shapes, coat with seasoned flour and shallow fry. They have a lovely nutty flavour, crispy on the outside and soft on the inside.

They are rich in insulin which is a mixed blessing as it's indigestible. This means the body doesn't absorb much in the way of calories from them so they're a great potato replacement if you're on a diet but it has the rather (cough) antisocial side effect of making a lot of wind in the gut. People do respond differently to the insulin though, some being more affected by wind than others.

They're difficult to get hold of in the shops which is why I decided to grow them. I bought some tubers last year then saved some of my harvest to re-plant this year. I needn't have bothered though as it's nigh on impossible to dig out each and every tuber and off spring of overlooked tubers are popping up unbidden all over the shop, one or two have emerged in a neighbour's garden - oops.

They're related to the sunflower, in some parts of the world they're known as the sun choke, and you can absolutely see that in the plant. They grow vertiginously tall, in the photo the fence behind them is about 6' tall and they're towering over it. The flowers, when they eventually appear, also look a bit like a stunted sunflower. They are somewhat over dominant in a small garden though, if our allotment goes through in the Autumn I'll be very glad to transplant them over there. Apparently they make an effective wind block on exposed ground so would suit the plot which is surrounded by open countryside.
Posted by Tracey at 08:21