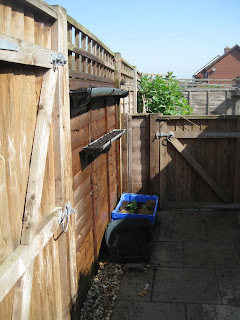 Ta Daaa!! The much anticipated radish skyscraper is finally functional! After a small amount of public shaming yesterday Adam built the infrastructure last night. He drilled drainage holes in the guttering and then attached it to the fence using normal guttering brackets. The guttering itself came from Freecycle and a friend donated a few brackets from his shed (thanks Mark) which left me with just 1 to buy so the whole thing cost me £1.79.

This morning I've filled the gutters with compost and radish seeds. As you can see we chose the spot where the sun hits the fence during the morning. Also in the photo is an old cat litter tray (Unused I hasten to add, the cat turned her nose up at it. The top half is currently being used by the chickens as a dust bath when they're not scratching up the lawn.) which we've drilled drainage holes in and I've planted with mixed salad leaves. You can also just see the tops of the Jerusalem artichokes poking over the fence, they're taller than me now.

I still have one length of guttering left, I had intended to use it and just balance it on top of the salad trays but I ran out of compost and it seems a bit unnecessary to buy a whole big sack just to gain a handful of radishes. I've got some radish seeds left over and I plan to plant them as a 'catch crop' around the rapidly expanding bean seedlings which I'll plant up this afternoon. How many weeks ago was it I said I'd finished potting up???
Posted by Tracey at 09:46