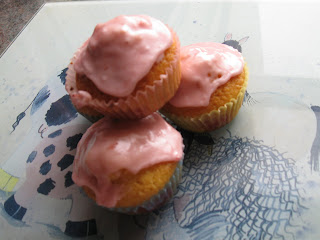 Today was Busker's Day at Willow's school. Parents are invited to come into to school and the children put on a variety of impromptu performances around the school grounds, after which they come around with a hat and relieve the parents of all their spare change, with money raised being donated to charity.

As Willow's in reception her class went in for a closely directed, reasonably formal whole class performance, heavy on the 'ahhh' factor. The older children devise their own performances, which results in a rather eclectic mix of acts including a handful of boys leaping around on a crash mat playing air guitar to the Clash and a surreal installation involving 3 boys lieing on the floor while a 4th reclined on top of his friends reading a magazine. I donated quite heavily to that one for sheer inventiveness.

In lieu of a hot dinner, families picnic together on the school field and it was while I was preparing our picnic that I realised I didn't have any little treats to go with the school approved wholemeal bread and hummus. I only had storecupboard basics to hand so decided to make strawberry cupcakes. I knocked up a basic 2 egg/4oz sponge mixture, put a spoonful of mixture at the bottom of a cupcake case followed by a teaspoon of my homemade strawberry jam and topped with more sponge mixture. I made strawberry icing by mixing icing sugar with another tablespoon of jam and enough water to make it a spoonable consistency.

I can't say it's the most sophisticated recipe I've ever devised but it's summery, quick, simple and very child friendly. Ideal for today in fact. I can recommend this cupcake recipe for something rather more refined, they certainly went down well at Proms in the Park 2008.
Posted by Tracey at 13:25