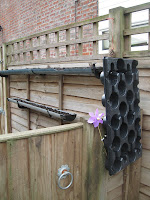 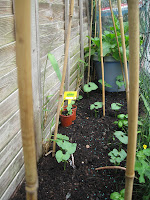 Yesterday I realised the major flaw in my Grand Radish Project. The guttering is positioned very conveniently at beak height for any chicken who chooses to perch on the gate nearby. I've hurriedly nailed up an old plant tray and some windmills by the top of the gate in the hope of discouraging the chooks from perching on top of it. The appearance of my garden once again lurches wildly into 'eccentric'.

Also pictured is my new 'Bens bed', created in the patch previously inhabited by the diseased courgettes. Rachel's courgette is in view in the distance looking chipper in it's blue pot. The borlotti and french beans are leaping skyward and I've sprinkled radish seeds between them as a catch crop. So thankfully it looks like I'm not going to have a huge wasted space in the garden after all.

Now, my next problem is the butternut squash, it's burgeoning fast in this weather so I need to give some thought to what to do with it before it reaches out into the road and starts lassoing passing traffic.
Posted by Tracey at 14:04