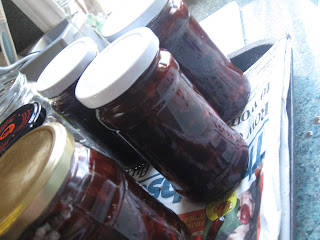 I love making chutney. I find the rhythmic chopping theraputic, generally put Radio 4 on and have a sloe gin to keep going. The bubbling pot steams up the kitchen keeping it nice and cosy against the chilly Autumn weather outside .... oh, hang on, we are still in July aren't we?

Chuck everything into a big pan (de-stone the plums first), let it simmer for 40 mins til thick and jammy. Spoon into hot jars and seal with non reactive lids.

Xanthe Clay (didn't name my Xanthe after her, rather it's vice versa, I bought the book because of she had my daughter's name) describes it as not for everyone "with it's salty sweet sour flavour ... it brings to mind HP sauce." It does have a very strong, unusual flavour but I like it. Apparently it's good stirred into curry.
Posted by Tracey at 12:13