Cat Fight in the Carrots! 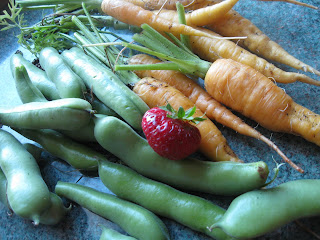 Much drama at the Kitchen today, Willow shot into our bedroom at 6am full of a tale of a cat fight she heard in the garden during the night. Apparently our cat lost her collar and there was "blood and everything!" I went out to see if there was any evidence of the nocturnal goings on but all that remained was a flattened patch in the carrots. On closer inspection quite a number of carrot tops had been broken so I pulled them up and got a satisfying crop of 'honeysnack'.

We chose this variety for a couple of reasons. Carrots are really cheap to buy in the shops so growing them ourselves doesn't make sense economically but where it does make sense is in the ability to sample rare or unusual varieties. This variety was described in the seed catalogue as very sweet and particularly suitable for eating raw, as raw carrots are more popular than cooked in our house it seemed a sensible choice. We pulled up one or two carrots as a test a few weeks ago when they were really small but I wasn't very keen on them at that point, they were stringy and had quite a parsnipy taste. Now they're fatter and fully grown they're far nicer.

The broad bean plants were looking very tatty after being attacked by caterpillars, I think the chickens managed a few sneaky pecks through the fence too, they were also wilting and yellowing so I picked off the last of the bean pods and then pulled up the plants. In their place I planted the remaining 'bens' seedlings. This is the first year I've grown broad beans and I've really enjoyed it, they're delicious simply steamed and buttered, I just wish I had more space to grow a larger crop.

Oh yes, we've seen the cat this morning, she seems fine. Evidently the interloper came off worse!
Posted by Tracey at 08:06