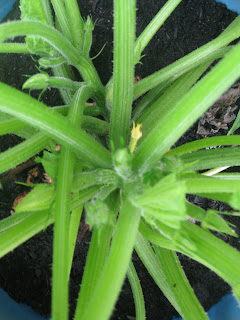 Transplaneted? That's a typo I made on Twitter some time ago when talking about transplaneted basil seedlings. It tickled me and now I can't say transplanted in the normal fashion.

Rachel's transplaneted courgette has been behaving in an interesting but slightly odd way. At first I thought it was doing fine as it was putting up flowers and one courgette grew although it was a funny shape which I put down to transplant shock. However, the other baby courgettes and flowers didn't develop, they died and fell off the plant. I was worried at this stage but what seems to have happened is that the original 'crown' (no idea if that's the correct horticultural term by the way!) where the courgettes develop has died back but the plant has gradually put out two new crowns. Baby courgettes and flowers appear to now be growing normally from both.

I'm desperately hoping they continue to grow and I'll finally get a courgette crop as I've only had one this year which is a blow not only to my appetite for courgettes but to my gardener's pride. Oh the shame of not being able to produce a glut of the simplest, most novice friendly veggie in the patch, where's that dunce's hat?
Posted by Tracey at 09:21

Email ThisBlogThis!Share to TwitterShare to FacebookShare to Pinterest
Labels: courgettes